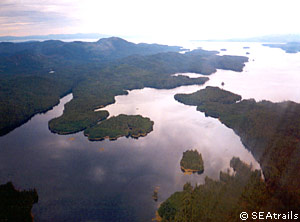 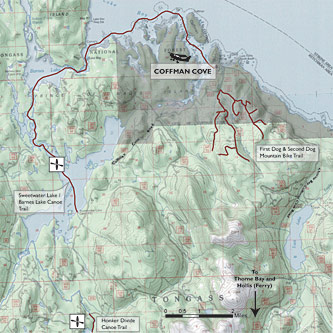 Coffman Cove, on the northeast coast of Prince of Wales Island is located within the Tongass National Forest and was first settled as a logging camp in the 1950’s. Currently the town has fewer than 200 residents who are still largely involved in logging support services, oyster farming and fishing. The community refers to itself as Alaska’s Hidden Secret because of its world class salt and freshwater fishing, crabbing, famous Coffman Cove oysters, clamming, and wildlife including eagles, whales, otters, and dolphins abound in the forest and waterways surrounding Coffman Cove.

The community was named in 1886 by a U.S. Naval Commander, and was first settled as a logging camp in the 1950’s. The community now has fewer than 200 residents who are still largely involved in logging support services (Coffman Cove is one of the major log transfer sites on Prince of Wales Island). Oyster farming also occurs in Coffman Cove and several residents hold commercial fishing permits.

Coffman Cove is one of eleven communities on Prince of Wales Island, Alaska’s second largest, with elevations from sea level up to 4,000 feet. The island measures roughly 135 miles from north to south and 45 miles from east to west and is 2,231 square miles.

Average rainfall is around 100 inches per year and climates remain generally mild and moist throughout the entire year. Snow fall is very modest in winter in the lower altitudes of the island. The Island was a site for lumbermills and mining camps since the 1800’s, but salmon lead to permanent settlement of several communities. There are around 25 canneries throughout the island to process salmon but the main activity remains logging. Prince of Wales Island offers uncrowded backcountry; kayaking and canoeing waters; good fishing for salmon, trout, halibut, and other bottom fish; excellent opportunities to view wildlife and some historical attractions. A major point of interest on the island is the El Capitan Cave limestone cave system located off Whale Pass. Scientific discoveries were found in those caves, including bones of a grizzly bear aged at 12,295 years and bones of a black bear aged at 11,565 years (guided tours are available in the summer, limited to maximum of 6 persons per tour).

Currently there is no public transportation system on Prince of Wales, but a private shuttle company meets each ferry and offers transportation to the City of Craig. If you do not have your own transportation, arrangements SHOULD BE MADE AHEAD OF TIME!

Alaska Airlines services the community of Ketchikan and from there it is possible to connect with a small air carrier to Prince of Wales. There are several air carriers that offer services to the island communities. Each community has regular air service, but some communities only have once a week service. The following air taxi companies offer regular or charter float plane service to Coffman Cove:

Additionally LAB Air offers wheeled plane service to the airstrip in Klawock from the Ketchikan Airport.

Coffman Cove has a population of around 163 and has the following services boat harbor, car rental, fuel, diesel and propane, general store, groceries, hardware, laundromat, library, liquor, lodging, post office, public restroom, showers, telephone, RV park and dump, school, souvenirs, basic auto and tire repair. Island wide there are a number of U.S. Forest Service cabins available for rental, there is one developed USFS campground near Thorne Bay, and wilderness camping is also an option in the Tongass forest.

Prince of Wales Island is dominated by a cool, moist, maritime climate. Average summer temperatures range from 49 to 63 degrees Fahrenheit and average from 32 to 42 degrees Fahrenheit in winter. Average annual precipitation is 120 inches, including 40 inches of snow. Gale winds are common in the fall and winter months.